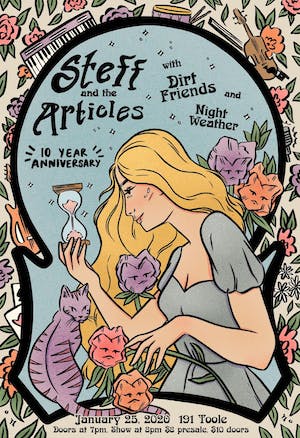 Steff and the Articles came together in 2009, once singer-songwriter Steff Koeppen assembled the group to bring her piano-based songs to life. The band produces music that touches on jazz, classical, and folk styles while maintaining an accessible, pop-oriented sound. They've opened up for national acts such as A Great Big World, Holychild, and Copeland (whose record Ixora features Steff).

In 2010, Steff and the Articles released their first self-titled, home recorded album. In 2012, the band released the album Stories You Can't TelI. Single “Two Cities” saw rotation on MTV Networks in 2013. That winter, the band released Why It Was So, an EP featuring single “Te Extraño." In 2014, the band toured behind the EP, hitting cities across the West Coast, South West and Mexico. Singles "Call You Mine" and "I Want More" were released Summer of 2014, followed by another West Coast tour.

Steff and the Articles most recently released full length Timekeeper in 2017, featuring singles "Keep You Around" and "Nothing Left." The band looks forward to celebrating their 10 year anniversary in January 2020.